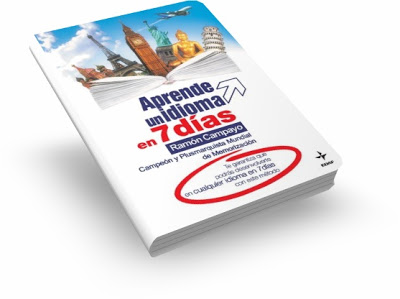 I read Ramon Campayo’s “Learning a language in 7 Days”. Great. After reading it, one wonders: why not teach it in all schools? While universities and schools are accumulation of knowledge these methods leave much to be desired. A better option is to be self-taught.   Ramon Campayo is originally from Spain, famous for winning over and over in the memory championships of many countries.

BARRIERS ARISING IN ANY LANGUAGE:

At first, when reading the title of the book, it seemed exaggerated but with everything he touches on there is logic and sense,  tips that are useful when learning any language.  With any language you will find the three main barriers (difficulties) are:

and maybe 4. The script language if this is very complicated and different from ours.

HOW TO HANDLE THE PURCHASE OF NEW VOCABULARY: Fundamental create tables that will have four columns. In the first column of the words will language you want to learn, in the second column the pronunciation of that word figuratively using the alphabet that is more understandable to the student of average (international phonetic systems uncomplicated, but in our case: the Spanish alphabet), in the third column the our language translation of the foreign word. And in the fourth column … this is what makes the difference to any other method we’ve seen before to learn languages ​​in the fourth column write a mental association of images that gets that word not ever forget us.

Since learning a language, plus the grammar should be acquired vocabulary, Campayo makes the observation that vocabulary is actually a cluster of “raw data” and therefore can be handled as such, using their memory techniques. Campayo gives greater importance to the acquisition and initial vocabulary grammar putting off, or rather, letting grammar gradually emerge.

Think without vocabulary reader may not progress adequately. I could not even consider something as simple as how to build sentences, ie its structure, because to do so will need to see examples, and unfortunately feel lost at all times to not be able to distinguish what kind of word is each.   The English language has a fairly simple conjugation system, but other languages ​​are very complex systems in handling verbs. What can you do to express yourself if you forget any complex rule’s a good point made ​​in the book is how one can achieve initially defended in a new language using only the infinitive of verbs, what he calls the way you speak Tarzan (in a manner not exact, but understandable.)

In the case of script languages very different from ours (Chinese, Hindi, Arabic, etc.). Campayo reveals that it is best to leave it for later learning your writing, and better initially concentrate on learning to speak the language. also recommended electronic dictionaries and translators (computer or laptop) that incorporate audible voice pronunciation of each term. Watching movies subtitled: Let’s say you’re learning English, to watch a movie: 1. First view with the audio in your native language (our case, Spanish) and English subtitles. 2. Watching the film a second time, but with English audio and Spanish subtitles. 3. third time seeing the film but with audio and English subtitles. 4. The last time , with English audio but WITHOUT ANY SUBTITLE this to check if we already without any help capture what we hear

The Campayo method is ideal for individual or group study. Following the pattern of the book, the use of a tutor may be valuable but not essential, and it is recommended that can be useful when one is already somewhat “soggy” language that interests you. equal in traveling to a country where they speak the language that interests us: it is recommended that once dominated the basis of language and not whether one is “zero”. Campayo released another book, a adaptation based on the method by applying it to learning English, the book is titled “Learn English in 7 days” and may be of interest for both books (Learn a language in seven days and this other book) can serve as a basis for creating methods and courses for any language in a simple and very practical. Both books, in the end, makes criticism Campayo education systems of countries not update and reinvent, even the Royal Spanish Academy, for inconsistencies. (All these observations seem accurate).

As he says: “Unfortunately, the precipitate abandonment of studies has a direct relationship with a frustrating feeling of carving ability, and for others it can be a direct path to crime, they may see more affordable cost and do other things. Indeed, if a country wants to claim to be developed and advanced will have to start by improving its education system if you want to start seeing results, but not by requiring fewer students ( lower quality standards), but through the use of appropriate techniques that will show their ability to acquire all kinds of knowledge, without incurring the embarrassed in no time while promoting the development of personality and self-esteem “